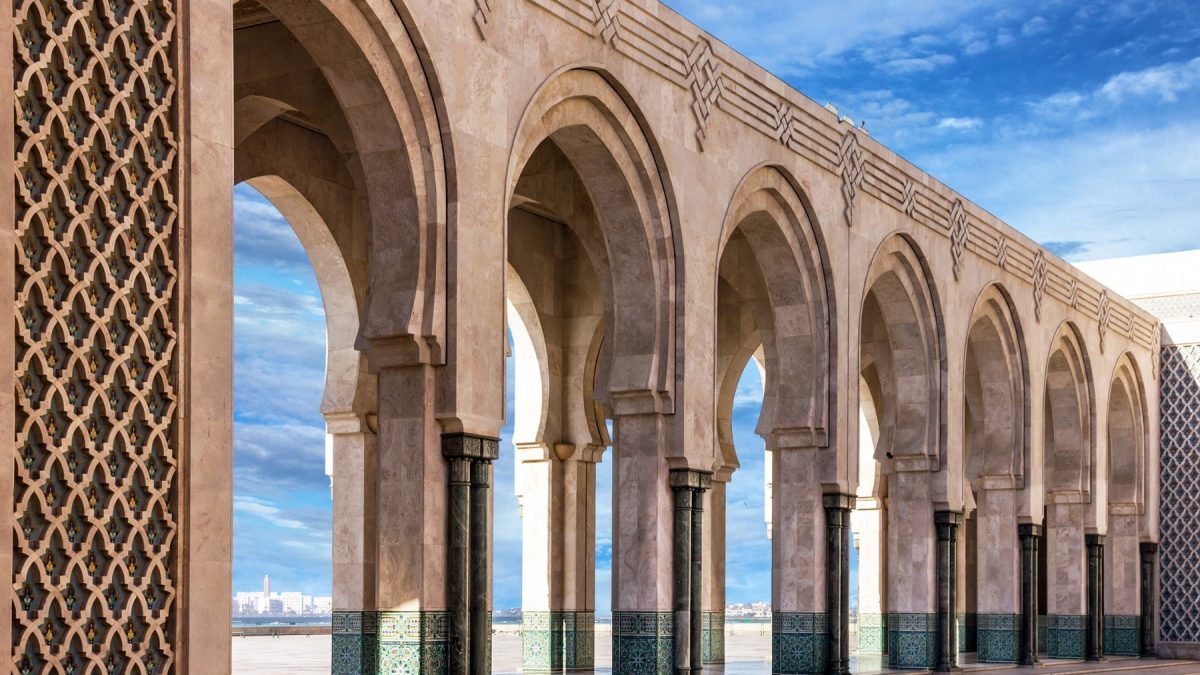 The coastal city of Casablanca is the largest in Morocco, with a cosmopolitan atmosphere,  and unique architecture that draws inspiration from both Moorish and French Art Deco styles. Casablanca, home to over 4 million people, is the business center, located in the central-western part of Morocco bordering the Atlantic Ocean.

Most visitors associate the cosmopolitan Casablanca with the ‘good life’, wealth and adventures.  The wide boulevards, well-maintained parks, fountains, and colonial architecture make the city look prosperous, but Casablanca remains a city of contrasts.

The city had its beginning as a 7th-century BCE Berber settlement, which was later used as a harbor by the Romans and the Phoenicians.  It is thought that during the Middle Ages, the city belonged to a great Berber kingdom called Anfa.

Casablanca is very different from Morocco’s Imperial Cities, where medieval architecture and atmospheric souks are the main attractions. It’s the place to get to know the culture, history and people of Morocco.

Casablanca is a modern city swathed in rich history and vintage romance and is the gateway to Morocco’s exotic interior and the Imperial Cities of Rabat and Marrakech.

Casablanca’s tourist attractions and sights may be few, but you will find some “gems”.

The big sight is the massive Hassan II Mosque.  688 feet high, Hassan II Mosque is the second biggest and third tallest religious building in the world. Its Minaret has 60 storeys and on the top there is a laser that points to Mecca.  To build this majestic monument it was needed granite, marble and wood — most of it extracted from places near to Morocco.

To visitants, it is an unforgettable place that combines arabic architecture and the typical moroccan style with Moorish influences.

Its interior  reveals some modern elements that improve the visit for tourists. This is one of the very few mosques that allow non-muslims to visit it.

Mahkama du Pacha  is a Hispanic-Moorish building comprised of more than 60 ornate rooms with delicately carved wooden ceilings. There are many  intricate wrought-iron railings as well as beautifully-tiled floors. Whoever walks through Mohammed V Avenue travels in time and witnesses the historical perseverance of Casablanca in its public buildings, such as the Justice Palacepolice station or

Central Post which built in 1918,  and the facade of this building is composed of both round and rectangular shapes.

The Medina is a charming and photogenic district full of old-fashioned ambience, and the city center is home to many beautiful Art Deco-style facades that architecture fans will adore.

Wander along cobbled streets beneath ornate archways and arcades, shopping for traditional Moroccan crafts at artisan stalls along the way.