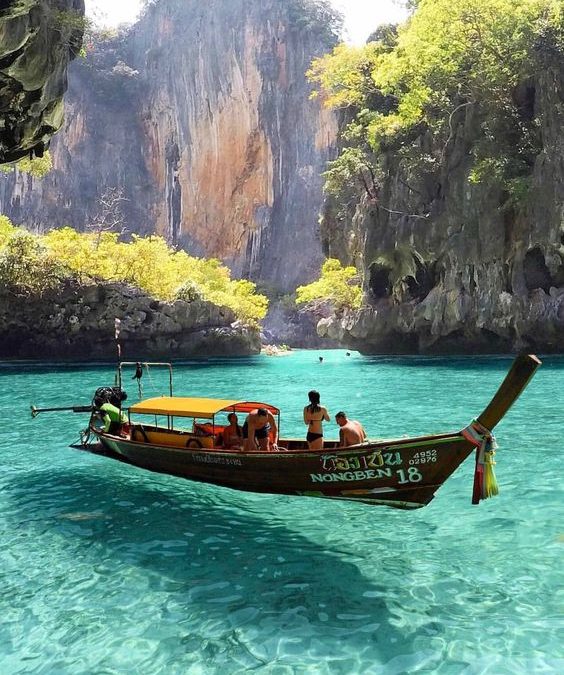 Often referred to as the Pearl of the Andaman, Phuket is Thailand’s largest island. With an impressive coastline featuring long stretches of sandy beach strung together, it’s been attracting people to its shores for decades. While this means that some parts of this large island can be busy, there is still a traditional and authentic side of Phuket to discover.

Phuket is one of the southern provinces  of Thailand. It consists of the island of Phuket, the country’s largest island, and another 32 smaller islands off its coast.

There are several possible derivations of the relatively recent name “Phuket”. One theory is it is derived from the word Bukit  in Malay which means “hill”, as this is what the island appears like from a distance.

As with the rest of the Andaman coast, the sea around Phuket is at its least inviting during the monsoon, from June to October,

Though it has plenty of hotels and restaurants, PHUKET TOWN (Muang Phuket) stands distinct from the tailor-made tourist settlements along the beaches as a place of tangible history and culture.

Phuket Town,  is the capital of the province. This is one of the oldest cities in the country. It was founded in the 19th century by Chinese and Malaysian traders who came to exploit the island’s tin resources. The buildings of the old town, with its Sino-Portuguese architecture, are silent witnesses of this prosperous era. There are still many Chinese Buddhist temples scattered throughout the city today.

The Phuket Old Town district, with its old colonial buildings, has a very pleasant old-fashioned atmosphere. In recent years, this heritage has been enhanced. The old shop-houses are being restored and converted into charming guesthouses, quality restaurants and trendy boutiques.

For a historic look at Phuket, head to Phuket Old Town. Thalang Road is the main hub here.

Aside from the shop houses, other architectural highlights within Old Phuket Town are the Sino-Colonial mansions. These stately mansions were originally the homes of the rich Chinese tin barons. The grandest example of these is the Blue Elephant Governor Mansion on 96 Krabi Road.

Most of Phuket’s population is Thai-Buddhist and there are close to 40 Buddhist Temples located all over the island.

High atop the Nakkerd Hills, northwest of Chalong Circle, and visible from half the island, the 45m-high, Burmese-alabaster Big Buddha sits grandly on Phuket’s finest viewpoint. It’s a tad touristy, but tinkling bells and flags mean there’s an energetic pulse. The Big Buddha statue one of Phuket’s most iconic landmarks and  is covered in white Burmese marble. Step up to the glorious plateau, where you can glimpse Kata’s perfect bay, Karon’s golden sands and, to the southeast, the pebble-sized channel islands of Ao Chalong.

Wat Chalong is the largest temple in Phuket. This colorful building is elaborately decorated with numerous images of the Buddha, along with imagery from Thai and Buddhist mythology. Wat Chalong houses many Buddhist statues, with the most revered being Poh Than Jao Wat, located in the westerly old hall of the temple.

The Sirinat National Park was founded in the early ’80s and consists of three beach areas along the northwest coast of Phuket. It includes the  beaches of Nai Yang, Sai Kaew, and Mai Khao, as well as the mangrove forest where the saltwater and freshwater mix. During the spring, endangered Leatherback Turtles come here to lay their eggs.

For an outdoor adventure, head inland to Phuket’s Khao Sok National Park, where you can get the full jungle experience–complete with elephants, rivers, and tree-house lodgings. This area is said to be one of the oldest rain forests in the world, and it’s certainly one of the most scenic, with its magnificent cascading waterfalls and dramatic limestone formations. Very few tourists know this park, but it offers some of the best hiking opportunities in a real jungle setting.”

Laem Phromthep (Phromthep Cape) is a headland forming the extreme south end of Phuket. “Phrom” is Thai for the Hindu term “Brahma”, signifying purity, and “thep” is Thai for “God”. Local villagers used to refer to the cape as “Laem Chao”, or the God’s Cape, and it was an easily recognizable landmark for the early seafarers traveling up the Malay Peninsula.

Beautiful 8km-long Hat Bang Thao is one of the longest, dreamiest beaches on Phuket. This slice of pearlescent sand is just asking for you to laze around on it and do nothing, with midrange bungalows at the south end and luxury resorts  in the middle.

Hat Nai Harn a beautifully curved golden-white crescent with turquoise water on the west side of Laem Phromthep, backed by caesarians and a seafront wát (temple), it remains one of Rawai’s great swimming and sun-soaking spots .

On Phuket, as in other regions across the Land of Smiles, Thai cuisine takes on its own distinct character. Soulful, spicy, salty southern-Thai cooking collides with Chinese and Malay flavors and influences. You’ll also uncover a world of exquisite fusion menus, elegant international cuisine and freshly caught seafood.